Web is moving towards responsive layout with allows you to (resize and) display web content according the screen size of the device being used to access content. Besides text and photos, lot of users embed Tweets inside wordpress posts. With WordPress support for auto embed, just paste the URL of the tweet and it will embed automatically. While this is easy but by default embedded tweet looks broken in responsive layout.

In responsive layout, the overall width changes according to device’s view area but tweet embed box sticks to its width setting. Do you want to make embedded tweet box resize according to changes in responsive design? Just add following code in style.css file. 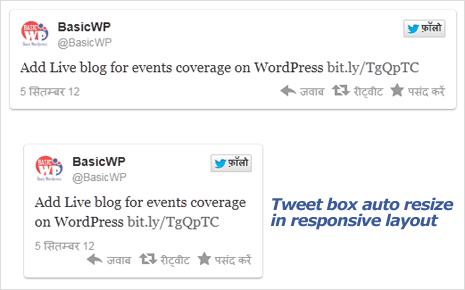 Once you add above code to style.css file, embedded tweet’s box will resize according to reponsive re-sizing of overall layout. Quick and easy, isn’t it? Credit Kovshenin

Share on TwitterShare on FacebookShare on EmailShare on LinkedIn

A digital creator with 15+ years of experience in Website Design, Development, SEO, and Content Creation to Podcasting at SmartWebCreators.com with the motto of "Be Smart, Keep Creating". A coach, consultant, and your dear geek friend ❖

Thanks for subscribing! Please check your email for further instructions.

Something went wrong. Please check your entries and try again.